Child abuse is repulsive and unforgivable. But we believe you are innocent. Why?

Because the doctor who headed the Connecticut investigation in 1993, Dr. John M. Leventhal, saw strong inconsistencies in Dylan Farrow’s statement and concluded that Dylan either invented the story or that this fantasy was planted in Dylan’s mind by her mother: “We had two hypotheses: one, that these were statements that were made by an emotionally disturbed child and then became fixed in her mind. And the other hypothesis was that she was coached or influenced by her mother. We did not come to a firm conclusion. We think that it was probably a combination.”

Because, after a 14-month-old investigation, the New York State child welfare investigators dropped their inquiry saying they considered the accusation against you unfounded stating: “No credible evidence was found that the child named in this report has been abused or maltreated”.

Because Monica Thompson, Mia’s former nanny, said in 1993 that Mia Farrow pressured her to support the accusations against you.

Because we’ve seen Mia in a vengeance mood over the years with her custody battles, her tweets and her posts. She seems to measure her triumphs by how many people hates you. And, most sadly, she seems to have achieved her biggest medal with the misery of her daughter Dylan.

Because we believe your son Moses. Moses recalls in Start to Finish: Woody Allen and the Art of Moviemaking, by Eric Lax, how Mia abused him physically and psychologically: “[Mia] hit me uncontrollably all over my body. She slapped me, pushed me back and hit me on my chest (…) I was defeated, deflated, and beaten down. (…) Yet, I grew up fiercely loyal and obedient to her, even though I lived in extreme fear of her. Based on my own experience, it’s possible that Mia rehearsed with Dylan what she ended up recording on video”. Soon-Yi Previn said about Mia: “She had a fierce temper. On one occasion, she kicked me and hit me again and again with the phone. She was always physical and violent with us”.

Because we believe Dylan Farrow is an emotionally broken person. A sister who can easily say to her brother: “You are dead to me” is not very healthy, is she? It’s sad to see her broken, but when she seems to spend all her energy in destroying you (so publicly and with so much melodrama) and in critizicing the actors who have worked with you, her mask falls off and only hatred, vengeance and ugliness are shown.

Because both the time and place of the alleged event don’t make any sense. The alleged event allegedly occurred on August 4, 1992 in Mia’s Connecticut home, a house full of people who hated you at that time. You were in a visitation day in the middle of a custody battle. As you said, that would have been the worse day to pick molestation.

Because we know that you past a lie detector proof in 1992, right after all this mess, that you voluntary took one, while Mia Farrow declined to have one.

The lack of loyalty to you (with attacks or with silence) among actors and actresses who have worked with you is really disappointing. Opportunism is cheap. Tweets and posts are easy. We know and you know who they are. Forget about them, since we already have forgotten them. 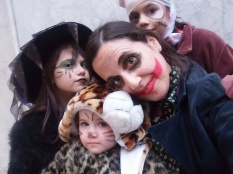