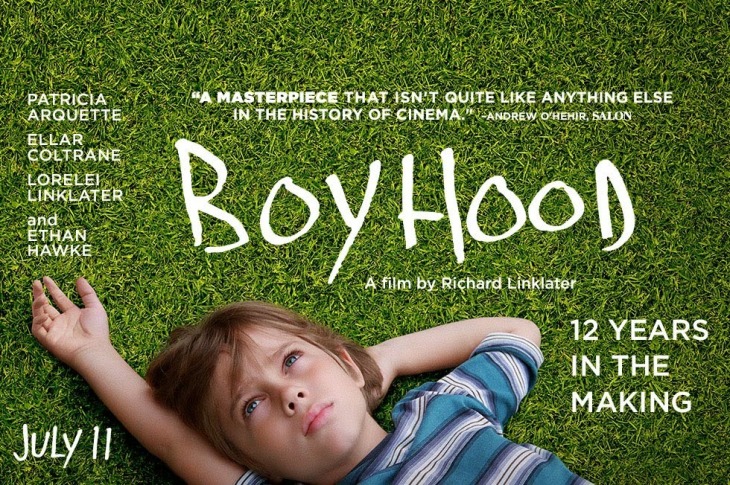 The day Boyhood arrived in Spain, I ran to the Cinemas Renoir Retiro, here in Madrid. I had not read anything about the movie and didn’t even see the trailer. When it comes to my favorite directors (Woody Allen, Richard Linklater and Radu Mihaileanu) I abstain myself from knowing any detail about their new movies. This way I’m able to go fresh to the premiere, absorb their art and let it influence me, without a priori distortions.

I was blown away by Boyhood. Not only because of the innovation and originality of the movie (“Boyhood is a complete original”, comments the exquisite Ethan Hawke, “It’s the first movie I’ve ever done that is truly not like another movie”[1]), but for its content, so human and real. The experiment of Richard Linklater (to shoot during 12 years a boy’s life) is a risky and audacious project, totally new in cinema history: “[Richard] wanted to shoot over a period of 12 years, collecting moments … building a whole imaginative life of a young person and to grow up with them. Personally, I couldn’t believe it hadn’t been done already, it seemed like such a great idea”[2]. According to Richard, the movie was only possible thanks to the loyalty, love and dedication of all the actors and producers: “It was so much to ask of everyone; for Ellar to mature on camera in one film …”[3].

Ethan comments that the project was done without contracts, and that Richard (whom Ethan refers to as “my best friend”) asked him to promise him that, in case Richard would die, Ethan would finish the movie. The result: spectacular. Boyhood is not only the life of a boy, but 12 years of all the lives that orbit around this boy: his sister, his mother and his father, whom grow, evolve, mature and age next to him: “at some point you are not longer growing up, you are aging, but no one can pinpoint that moment exactly”[4].

Which movies manage to touch our guts? Aren’t they those who make us feel, in some sense, identified? In Boyhood, the younger ones will feel identified with the characters of Mason (Ellar Coltrane) and Samantha (Lorelei Linklater), especially in their adolescence, while those whom are not so young will feel identified with the characters of the parents (Patricia Arquette and Ethan Hawke). The movie reflects daily situations, wonderful and painful moments that we all have felt or lived in our small and individual story. Richard says: “There is something so normal in a certain way about Mason’s story that I really always felt that it would be about moments everyone shares”[5].

The cast of the movie is sensational. Ethan (whom captivated a lot of women –and men– with the characters of Troy in Reality Bites (1994) and of Jesse in Before Sunrise (1995),Before Sunset (2004) and Before Midnight (2013), appears brilliant, elegant, sexy and interesting in his role of an irresponsible and cool father. Patricia does an extraordinary performance, with which a lot of women of my generation with kids (and older than me) will feel identified (although our story, especially our love story, has been very different). According to Ethan, it is rare to see “real women” on the screen, and Patricia personifies, above all, a real woman, with her frustrations, her hopes and her achievements. For Patricia, the most difficult thing was to finish the movie: “The hardest thing was when it ended. I wanted to continue shooting it for the rest of my life and I never wanted anyone to be allowed to see it”[6]. Ellar (who had a very free and artistic education) starts with a fine performance and slowly, but surely, reveals to be one of the young promises of the moment. Lorelei (the director’s daughter) shows since very young her talent as an actress. And who does an absolutely brilliant performance is Marco Perella, in his role of a professor and alcoholic, severe yet dedicated (although a bit psycho) father, who provokes hatred, compassion and repulsion.

Ethan and Patricia comment that they never got any script. According to Ellar, Richard had a very clear idea of the movie in his head, but the script was not written, not at all: “A lot of times we would write the dialog the day before we shot”[7]. The actors never had to learn a script by heart, the dialog was being built up among the entire cast. Richard would advance the themes of each coming year so that the cast could think about what they were going to shoot.

The 12 years of the life of Mason are also a blueprint of some of the crucial facts of American history (under the democrat and critic prism of Richard and Ethan, both Texans and strong critics of their country): the Iraq war, the lies of Bush and Obama’s election. The scene of the yard signs of Obama and McCain is genius and comic. Everyone who is aware of the American idiosyncrasy will enjoy it with a chuckle or a laugh.

Richard shows, as always, his great vision for life, love, human relations and the pass of time. His vision is artistic and real at the same time. According to Patricia, Boyhood is a movie about humanism, mistakes, learning, trying and loving: “I think this movie is about humanism, flaws, making mistakes, learning as you go along, trying, wanting for love, giving love to each other …”[8].

Isn’t life mysterious and beautiful, without the necessity of false ornaments? Ethan asserts: “Life is beautiful and interesting enough as it is and you don’t need to manufacture a lot of falsehood”[9]. The movie shows the choices of the characters, without judging them and without morals. Don’t we all choose, every day of our life? Man is freedom, as Sartre well said[10]. The existentialist touch is given by Richard: “What else is life but a series of decisions? You know, some are good and some are bad”[11].

Richard already showed us his geniality in his masterful and unforgettable trilogy Before … And then there’s another favorite of mine: The Newton Boys (1998), an attractive comedy“alla The Sting” (based on a true story from the last century’s 20s) about 4 brothers that become famous bank robbers (the music is sensational and the cast –with the charismatic Matthew McConaughey, Ethan and Skeet Ulrich– is really good). Another of his great movies is Tape (2001), an experimental movie with only three actors (Ethan, the half goddess Uma Thurman –ex-wife of Ethan– and Robert Sean Leonard –the unforgettable young poet that commits suicide in Dead Poets Society, 1989–) and only one scenario (a hotel room). Richard’s biggest critic is expressed in Fast Food Nation (2006), a strong and, in many ways, disgusting movie that made me quit eating meat immediately.

Boyhood arises as one of the most brilliant, emotive and human movies in cinema history. Richard defines it like “one story, made up of a lot of little pieces”[12]. If Boyhood conquers this year’s Oscars, the “European intellectuals” will be able to say that the “stupid Americans” have matured a bit.

The best: the originality, the director and the actors.

The worst: that it lasts almost 3 hours, in stead of 6.